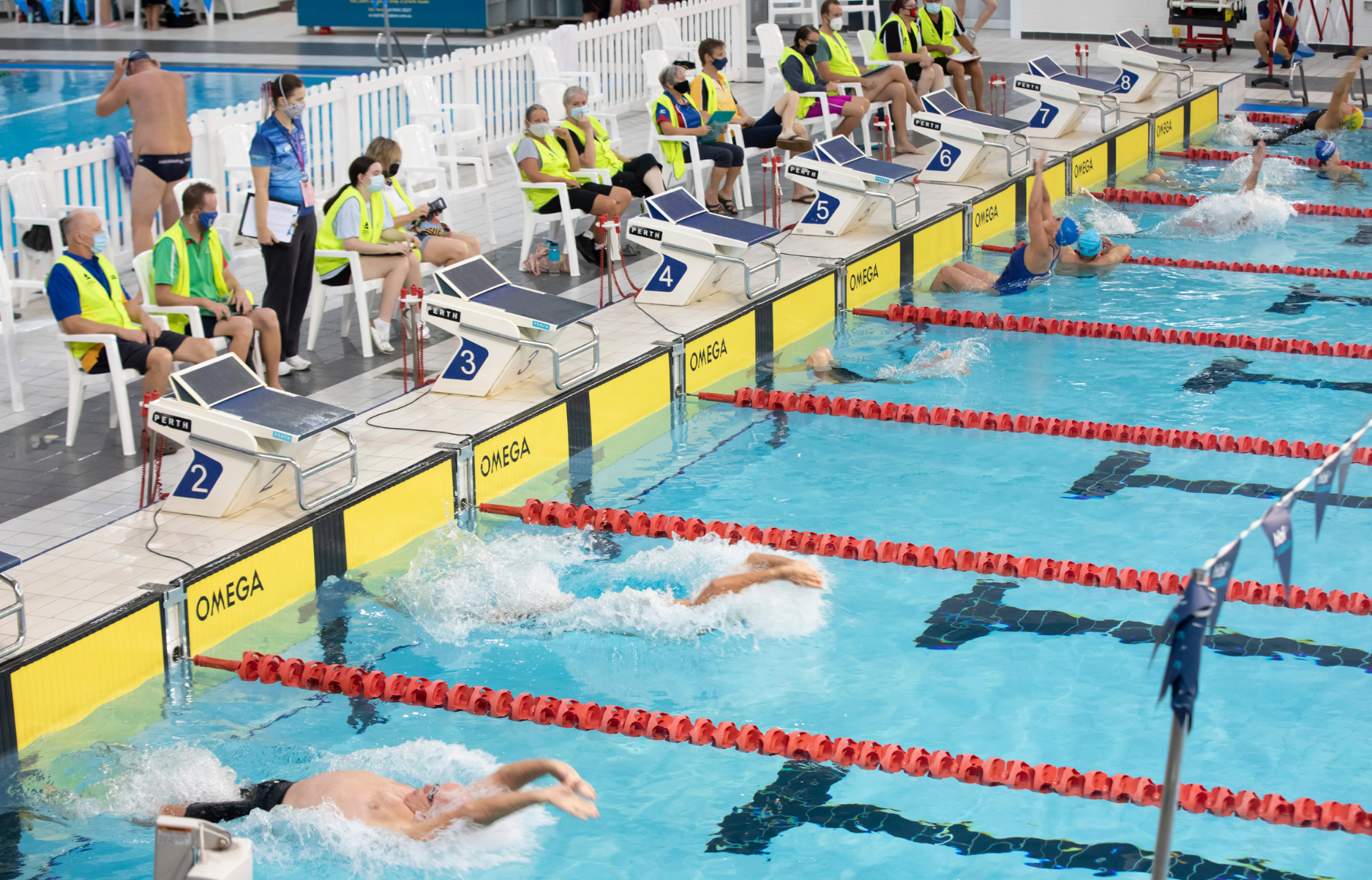 What an incredible two days of racing at HBF Stadium!

The Championships saw five National records tumbling! Helen Bird (Beatty Park), 85 years young, was the standout performer at the meet, taking out four National records in the 85-89 age category – the 50m, 100m and 200m Backstrokes and 50m Butterfly. Helen swam seven events in total and continues to prove that age is no barrier to maintaining great technique and grace in the water. Paul Blackbeard (Perth City), an open water Masters legend and totally dominant in our summer WOW Swims Series, proved he can also do it in the pool. Paul broke the National 200m Butterfly record in the 60-64 age category.

There were an additional 12 new State records set at the Championships, by the following swimmers:

Swimmer entries were fewer than previous years, and there were 23 withdrawals, but that was expected as the State battled peak-COVID. And, with limits on spectators there were fewer supporters in the stands. However, that didn’t detract from the spectacle.

Our officials, led by Meet Referees Lynne Duncan and Ron Gray, navigated the latest COVID protocols and kept the event flowing and to time.

However, it is the swimmers who make the event. Claremont (30 athletes) and Beatty Park (25) are the perennial leaders in the numbers of competing athletes. Third on the list were the mighty Superfins, who had 19 athletes in the field and provided such inspiration with their never-say-die commitment in the pool. Our announcer Elena Nesci, at one stage, was heard over the speakers speculating whether there were two James Burt’s in the field, such was the Superfins swimmer’s omnipresence across the swim programme.

A special mention to Glad McGough, a mere 92 years old who, despite 18 months out of the water, entered multiple events including the first three on the programme! She was also entered for the 200m Individual Medley only to pull out – reasons unknown, but nobody blamed her.

This year we received four nominations for our Have-A-Go-News award for the swimmer who really does have a go at the event and embodies the Masters’ ethos of “Fitness, Friendship and Fun”. This year the trophy went to Kathleen Wainwright, a worthy winner who contributes so much to the Carine club and was swimming in only her second meet.
Well done to all 26 clubs and 168 swimmers competing. Thanks to the officials who do a great job week-in-week-out, to the volunteers, and a second special mention to Richard Johnson, our State Recorder, who is so instrumental in the operation of this and many other events from registration to results.

Rounding up the principal awards presented at the Championships, the Claremont and Beatty Park clubs featured strongly in both the individual and club awards. The Geraldton Masters club managed to steal the Country Club crown from Mandurah Masters, host to last year’s Championship.

The main awards winners were as follows:

Our principal sponsors of the State Championships are Healthway and ‘Act Belong Commit’, the state-wide mental health promotion campaign designed to encourage people to take action to improve and protect their mental health and wellbeing.

This year we welcomed SwimTek, as our new official swimwear and equipment partner, to the event. SwimTek very generously contributed some great prizes to our fundraising efforts at the event, undertaken in partnership with the Superfins.

Thanks also to StretchLab Australia and Retravision Joondalup for their support of the event.